OSB is an engineered wood-based panel material in which long strands of wood are bonded together with a synthetic resin adhesive. OSB is usually composed of three layers, with the strands of the outer two layers orientated in a particular direction, more often than not in the long direction of the panel.

How is it made?

The timbers used in OSB manufacture include both softwoods (spruce, pine) and hardwood (aspen). Wood strands are cut tangentially from debarked logs which are held longitudinally against rotating knives. After drying, these flakes are generally sprayed with a synthetic resin binder and wax and then bonded under heat and pressure between steel belts.

What is this used for? 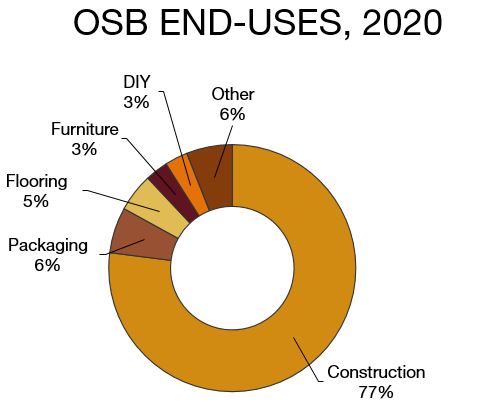 Because of its lay-up and composition, OSB is primarily a panel for construction and is widely used for flooring, flat roof decking and wall sheathing. 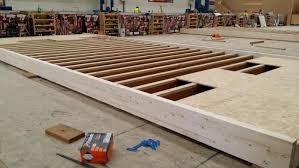 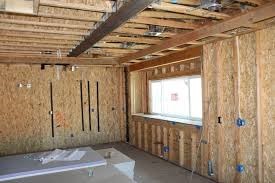 OSB’s strength mainly comes from its uninterrupted wood fibre, interweaving of long strands and the degree of strand orientation in the surface layers. Waterproof and boil proof resin binders are combined with the strands to improve internal strength, rigidity and moisture resistance. 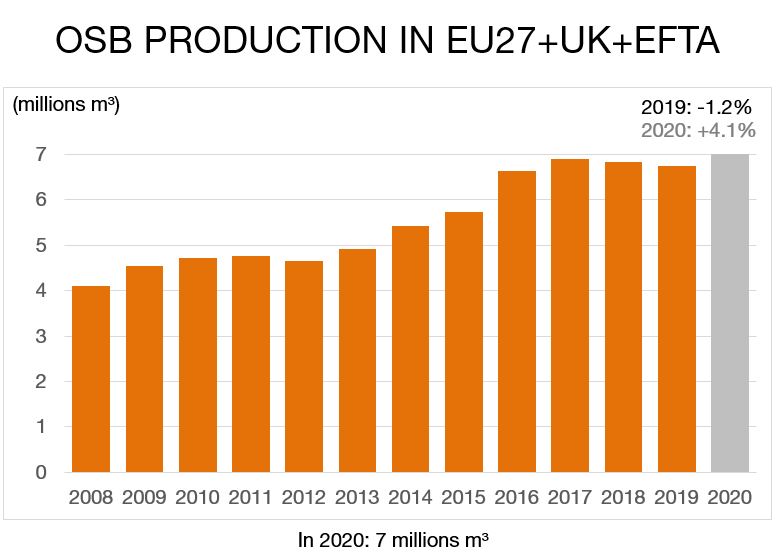 OSB (Oriented Strand Board) is an engineered wood-based panel consisting of strands of wood which are bonded together with a synthetic resin; the strands are pressed together in layers. In the outer layers strands are generally oriented longitudinally in line with the panel length, whereas in the middle layers strands generally lie in a cross wise direction.

The wood species used in OSB manufacture include both softwoods (spruce, pine) and some hardwood. Wood strands are cut tangentially from debarked logs which are held longitudinally against rotating knives. The ribbon of strands produced is usually about 75 mm wide and this breaks up on handling to produce individual strands which are typically 100 mm along the grain and from 5 to 50 mm across the grain.

After drying, these strands are sprayed with a synthetic resin binder. The resin types typically used include Phenol formaldehyde (PF), melamine fortified Urea Formaldehyde (MUF) or isocyanate (PMDI), all of which are moisture resistant binders. In Europe, it is common to use a combination of binders, typically PMDI would be used in the core and MUF in the face layers and this has the advantage of reducing press cycles whilst imparting a bright appearance to the surface of the panel.

OSB is readily identified by its relatively large and long wood strands. The orientation of the surface strands is not always visually apparent, especially in small cut pieces of panel. The main merits of OSB lie in the field of its mechanical performance, which is directly related to the geometry of the strands and their orientation within the panel. Although OSB is made up of relatively large strands of wood, its surface is relatively smooth and this can be further enhanced by sanding without loosing the aesthetic character which is unique to OSB.

OSB varies in colour from a light straw colour to a medium brown depending on wood species used, resin system adopted and pressing conditions employed. It contains no knotholes, core voids or points of weakness.

Panel density (and thus panel mass) varies depending upon the product, being affected by the timber species and the manufacturing process. Typical densities are 600-680kg/m_. Thus, for example, a 2400 x 1200 x 12mm panel will weigh approximately 20 kg.

Other sizes are available or can be produced to order. Panels are produced with either square or tongued & grooved (T&G) edges.

Due to its high mechanical properties and the orientation of the strands within panels, OSB is particularly suitable for load-bearing applications in construction and is widely used for flooring, roof decking and wall sheathing, but there is also a wide field of other applications where OSB as a wood-based panel product can be utilised. Different grades of the product are available for different levels of loading and different environmental conditions. Guidance on the use of OSB in these load-bearing applications is given in ENV 12872 and EN 13986. OSB is a quality, precision-engineered product that can satisfy the same applications and loading conditions as plywood and in some cases a thinner OSB panel may be used thereby reducing costs.

Large quantities of OSB are also used for sarking and industrial packaging and in site hoardings and pallet tops.

It will soon be a legal requirement to demonstrate that OSB used in construction satisfies the requirements of the European Construction Products Directive. This legal requirement is written into national building regulations. Manufacturers shall demonstrate compliance with the legal requirements by showing that their OSB complies with the harmonised standard EN 13986 “Wood-based panels for use in construction – Characteristics, evaluation of conformity and marking”. This standard should be published before the end of 2001. It calls up EN 300 “Oriented Strand Boards (OSB) – Definitions, classification and specifications”, which will have to be used when specifying OSB.

Four grades of OSB are defined in EN 300 in terms of their mechanical performance and relative resistance to moisture. These are:

OSB/1 – General purpose boards and boards for interior fitments (including furniture) for use in dry conditions.

OSB/2 – Load-bearing boards for use in dry conditions.

OSB/3 – Load-bearing boards for use in humid conditions

OSB/4 – Heavy-duty load-bearing boards for use in humid conditions.

The threshold value requirements for specified mechanical properties of the 4 OSB grades in EN 300 can be summarised as indicated in the following tables. The values are 95 percentiles (5 percentile values in the case of swelling in thickness) and are characterised by a moisture content in the material corresponding to a relative humidity of 65% and a temperature of 20Â°C. This implies that these specified mechanical properties have to be controlled according to statistical principles and that 95% of the test values on individual samples have to exceed (or remain below in the case of swelling in thickness) the respective threshold value requirement in EN 300.

Like other wood-based panel products, OSB is hygroscopic and its dimensions change in response to a change in humidity. A 1% change in moisture content increases or decreases the length, width and thickness of the different grades of OSB by the amounts set out in the table below.

OSB must be conditioned to bring it into equilibrium with its environment before it is fixed. This is usually achieved by loose stacking of the panels in the room where they will be used prior to fixing them. The time required for the panels to achieve equilibrium moisture content will vary depending upon the temperature and relative humidity in the building. The likely equilibrium moisture content levels of OSB in various conditions are as follows:

In a building with continuous central heating: 5-7%
In a building with intermittent central heating: 8-10%
In an unheated building: up to 15%
When components are factory produced for installation on site, it is essential that the site conditions are suitable to receive the components with wet trades completed and the building dried out.
OSB with enhanced moisture resistance (OSB/3; OSB/4) is not waterproof; the term â€˜moisture resistantâ€™ applies to the adhesive binder which (within limits defined by EN 300) will not break down in the presence of moisture. Physical wetting of all grades of OSB should be avoided.

Careful storage and handling is important to maintain panels in their correct condition for use; thus, OSB must be protected from rain and accidental soaking. During transport, it is particularly important to keep edges well covered. Panels should be stored flat in an enclosed, dry building. When handling boards, the edges and corners should be protected against damage.

OSB can be cut by a hand or power saw and machined (routed, spindled, planed and bored) with common woodworking machinery. Tungsten carbide cutting edges are recommended for use with powered tools.

a) Mechanical joints and fixings

Wherever possible, fittings that depend upon face fixing should be selected; fittings that depend upon the expansion of a component inserted into the board edge should be avoided.
Conventional woodworking fixings and techniques can be applied to OSB which provides good holding power for screw fixings into the board faces; generally, edge fixing is not recommended.
Parallel core screws should be used because they have greater holding power than conventional wood screws. A high ratio of overall diameter to core diameter is desirable.
Drill pilot holes for all screw fixings. Typically, the holes should be 85 to 90% of the screw core diameter. Fixings into the board face should not be within 8 mm of edges and 25 mm of the corners.
Nails and staples can be used for lightly loaded fixings or to hold glued joints while the adhesive sets.

A wide variety of jointing methods can be used, provided the following simple guidelines are observed:

Â The joint parts should be accurately machined.

Where smooth surfaces are required pre-sanded panels should be specified.

OSB will generate dust when it is machined and this dust, like any other wood dust, is a potentially hazardous substance and must be controlled. There is no evidence that exposure produces health effects that are different in nature to those associated with exposure to similar levels of dust from other wood sources.

Exposure Limit in the country of use. Exposure must be reduced as far as possible below this limit, usually with properly designed and maintained dust extraction equipment fitted to woodworking machines.
Extraction equipment is often not practicable or even available when using portable or hand-held tools, so a suitable dust mask (for example, Type FFP2 to EN 149) should be worn. If possible, work in a well-ventilated place.

Studies indicate that anyone machining OSB in mechanically ventilated situations is exposed to extremely low levels of free formaldehyde.

The table below gives the most common hazards and identifies control methods to minimise the risk of harm actually occurring.