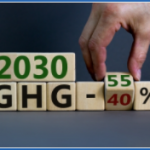 In her 2020 State of the Union address, President von den Leyen proposed the reduction target to be set at 55 % alongside a revision of the EU’s climate and energy legislation. The Commission adopted the communication ‘Stepping up Europe’s 2030 climate ambition – Investing in a climate-neutral future for the benefit of our people’ (commonly known as the 2030 EU Climate target plan), on the same day. It includes an updated 2030 emissions reduction target of net of at least 55 % compared to 1990 levels, from the current 40 % emissions reduction target. On 28 June 2021, the Council adopted its position at first reading on the European climate law, ending the adoption procedure and setting into legislation the objective of a climate-neutral EU by 2050.

As expected, the European Commission published on 14 July 2021 the first batch of its ‘Fit for 55’ package including the following initiatives:

The following two additional initiatives are announced for fourth quarter of 2021:

1m³ of wood stores approximately 1 tonne of CO2. Using wood to make products is a means of extending its potential as a carbon sink.

A recent study commissioned by the Confederation of European Paper Industries (CEPI) shows that the European forest-based sector provides integrated solutions to the global climate challenge on a very large scale that account for an  overall and positive climate effect is estimated at -806 million tons of carbon dioxide equivalents annually.  The combination of Sequestration, Storage and Substitution (the 3S framework) means that the EU forest-based industries today make a positive climate contribution equivalent to 20% of all EU fossil emissions. The overall climate effect is calculated as a sum of:

In order to unlock the full potential of carbon storage in wood-based products, such as wood-based panels, and to enhance the use of wood in longer life cycle products while substituting other energy-intensive and fossil-based products, accurate carbon metrics are fundamental. According to a recent study from the Aalto University and the Finnish Environment Institute, shifting towards the use of wood as a building construction material could critically reduce the environmental impact of building construction: the study shows that a wooden building of 100 m2 has the potential to store 10 to 30 tons of carbon dioxide and that increasing the use of wood for construction in Europe could increase the carbon storage of buildings up to 420 million CO2 tons over the next 20 years.